Gender: Male
DOB: November 20, 2012
Hexer: Midnightwolf
Comments: I was super thrilled to be able to buy one of Middy's lovely tigers.
His pure white coat is so pretty and I love the details of his nose <33 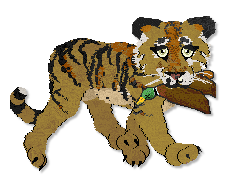 Gender: Female
DOB: January 3, 2013
Hexer: Daveena
Comments: I wasn't able to get one of Daveena's tigers, but
that's okay because I got a freakin Liger instead! Look at her, isn't she awesome?!
She even has teefs! 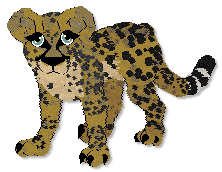 Gender: Male
DOB: July 4, 2012
Hexer: WARHORSE
Comments: Azua was the first non-PKC pet that I ever wrote an app
for and I'm so thankful that WARHORSE allowed me to own one
of her gorgeous cheetahs. Azua is such a fun boy, when he was a baby
I could barely do anything with him because the little rascal refused to sit still.

Gender: Female
DOB: June 2, 2013
Hexer: Heather
Comments: Aww, it's a little pocket tiger. And a golden one no less!
Kanaka is adorable and a happy little cat. Silly thing loves to climb.

Gender: Female
DOB: July 12, 2012
Hexer: Elizabeth79
Comments: Yes I really did name my manatee Barbara. I just couldn't
resist. Barbara was the first trade I ever made, and the first non-PKC
pet I adopted. It's so cool watching her in my game, her tail
moves and it really does look like she's swimming along.

Gender: Female
DOB: July 4, 2012
Hexer: Me
Comments: Cinni was also hexed and named after
a rabbit I owned growing up. Only the real Cinnamon wasn't
a lop. I just wanted a lop and wanted a Cinnamon so there we go!

Gender: Female
DOB: July 5, 2012
Hexer: Me
Comments: Springy was also hexed/named after a real rabbit I owned.
Fortunately, my petz Springy is quite a bit nicer than the real Springy was.
The file is Persian-based so they're adorably floppy.

Gender: Male
DOB: January 22, 2013
Hexer: Nova
Comments: Yay, I got a Nova bunny! Isn't he adorable
with those tufts of fur on his face?? He's quite a handful
though, very opinionated.

Gender: Female
DOB: January 26, 2013
Hexer: Static
Comments: Dik Diks are pretty much the cutest things ever and
Flutter is no exception. Silly thing is afraid of her own shadow, it's
both sad and entertaining. Gotta love those Oshie personalities!

Gender: Female
DOB: February 1, 2013
Hexer: Nova
Comments: I love this little girl so much. She's so adorable, and I
have a huge soft spot for big ears (which would be why I love
Fennecs). Sahra's a fun little fox, though holy cow this girl is
super hyper all the time. She's into everything! Definitely
makes life interesting!

Gender: Male
DOB: December 28, 2012
Hexer: Heather
Comments: I love Reynard's colours so much, red and black are
one of my favourites and so fitting for a red fox. Aww, look
at his adorable whiskers, so cute!
Back